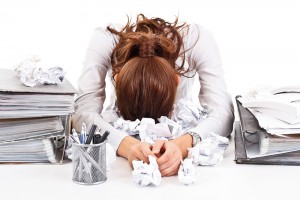 Stress in the workplace would seem to be fairly universal. The topic can be found in articles, forums, chat rooms, blogs, advice columns and every other medium of communication imaginable. Stress free or low stress jobs would seem to be non-existent as the working world insists on an ever-increasing pace of productivity in order to stay competitive. Three main stress factors have been found to be largely responsible for the stress epidemic that is sweeping the modern workplace.

The first and foremost cause of workplace stress is an excessive workload. Not personal problems or misinterpretations, simply too much work. Particularly after the recession that began in 2007 when business resources were at an all time low, it became very common for one person to do the work of two or more. As superhuman as many of us try to be, there is a limit on how much we can do in a day. One of the functions of the modern working world is to test those limits and push the boundaries of what is considered a “normal” amount of work. Many businesses push too far and expect too much, resulting in the mental collapse of its employees.

Bad communication and relationships are another large source of stress within the workplace. This may be with co-workers or with supervisors. An inharmonious workplace is far more common than a harmonious one because poor communication skills and poor conflict resolution skills are allowed to flourish. Instead of addressing issues, those working together tend to repress them and grow resentful of their co-worker instead of speaking up. This is a psychologically unhealthy behavior that should be corrected for the sake of the entire work force.

And lastly, stress in the workplace can simply be due to a person’s unrealistic expectations, either of their own working abilities or of their employer. It is not always an outside factor that is responsible for the stress on a working professional. Often, the catalyst can come from within. It is more common for a person to enter the working world with unrealistic expectations of how it works than it is for a person to be naturally in sync with it.

In Canada, there are a great many stressful workplace environments you may find yourself in, such as a position with the RCMP or a number of jobs in Fort McMurray. Do not succumb to workplace stress. Instead, heed the advice of the mental health experts who can guide you in your pursuit of good stress management.